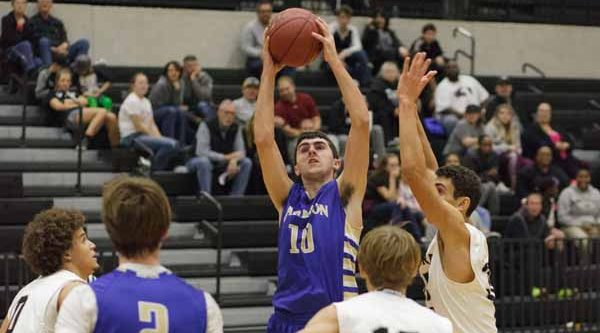 By Angie Brushwood (for OzarksSportsZone.com)

Willard, MO – Willard and Harrison faced each other in the CoxHealth/Willard High School Tri-State Basketball Classic Thursday, ending with a 75-58 win for the Willard Lady Tigers and a 78-61 loss for the Willard Tigers.

The Willard Tigers looked like they were going to stand against the Harrison Goblins in the first quarter, trailing by one going into the 2nd (14-13). But the Goblins had much more play in reserve, and the Tigers’ leading scorer Daniel Abreu (soph.) was benched for foul trouble.

The Tigers regrouped in the second half, trying to keep pace with the Goblins and pulling within 11 points after Daniel Abreu and Kobe Holloman sank 4 consecutive buckets in the 3rd, 51-40. But the Goblins had found their groove and held the Tigers off 78-61.

“We didn’t guard very well, that was the biggest thing,” said Cutbirth. “They got too many shots at the rim and too many shots in the paint. Defensively, we just didn’t guard, and offensively we struggled. Our shooting percentage was abysmal. However, it’s our first game, and we’re going to go through some growing pains. I think the kids may have been a little too amped up offensively. The breakdown on defense is probably the biggest thing I took away that we have to get better at.”

“It’s a learning experience first game of the year,” said Batson. “We’re looking forward to March. This is all a growing experience right now for us–new coach, new chemistry as a team. We just have to work as a team and get our chemistry down early. Harrison crashed the board really hard, so we have to get everyone down there and go rebound. That’s one of our weak points right now. Everyone has to go rebound.”

The Goblins’ head coach David Stahler was not surprised by Willard’s speed on the floor.

“We knew they were going to be a real well disciplined, hard playing, quick group,” said Stahler. “We knew their strength was their quickness. They really sped us up offensively because of their quickness, and I don’t know if we ever adjusted to that. They do a great job defensively.”


The Lady Tigers took an early lead over the Lady Goblins after Nona Adamson’s trey in the early minutes gave her team an 11-8 advantage. The Lady Tigers led 34-16 at the half, showing off their quickness on both ends of the court.

“Our defensive effort was fantastic tonight,” said the Lady Tigers’ head coach J. J. Adamson. “We have some areas we can do better on, but I’m very proud of our kids’ effort and energy. They do such a good job and they work very hard, and it’s evident in the way they play each and every night.”

Brylie Parker led the Lady Goblins with 27 points, including one trey and 10-for-10 at the line.